I often meditate for a preset amount of time. This helps with not thinking about how long I’ve been meditating (aka Timer Anxiety). I also often only have a limited amount of time for that.

Whenever I meditate, I need to:

Generally I found 3 possible solutions to this:

Given the above, I decided to go with a shortcut, and found this shortcut which does the above things (and some more).

First - shortcut would sometimes log 14 minutes of meditation instead of 15 (aka 1 less). I found the bug and updated the shortcut (see shortcut link bellow).

Second - I wanted to have a bell sound both at the beginning and before the timer would ring. That’s because I always have my phone on silent, including my alarm app having only vibration and no sound. But I found it very jaring to end the meditation with a vibrating phone. So I wanted the same bell sound to play 20-30 seconds before the timer would end to be able to exist the meditation “softly”.

And I stil wanted to keep the alarm as a back-up if sound wouldn’t play.

iOS shortcuts allow you to play a sound, and to have a “wait” clause. The problem with these is that they’re blocking. Aka is you ask it to play a sound, it will not perform any other actions until the play has ended. The same goes about the “wait”. Which would work fine, but on top of that, iOS shortcuts have a timeout (5-10 minutes). So if your meditation session is longer than the shortcut timeout, the final sound would not play.

A “simple” and reliable solution that I found is to play the sounds in Music app, and for the “gap” in between sounds, use mp3 files with no sound.

So the sequence would be: 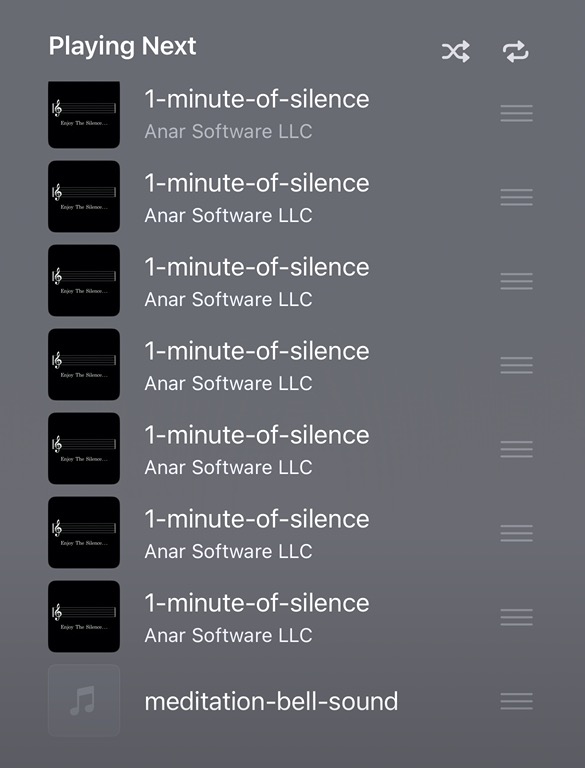 For the bell sound I used this track which is 17 seconds long.

For the “blank” sound I used this track which is 1 minute long. I chose 1 minute because it allows me to create dynamic playlists of any duration.

How to use the shortcut

You can use any sound instead of the bell if you wish. You can also have a different sound for the beggining and the end of the session. For that you’ll have to change track name in the shortcut.