This blog post describes my experience of cycling on an electrical bike through a volcano from one side to the other. 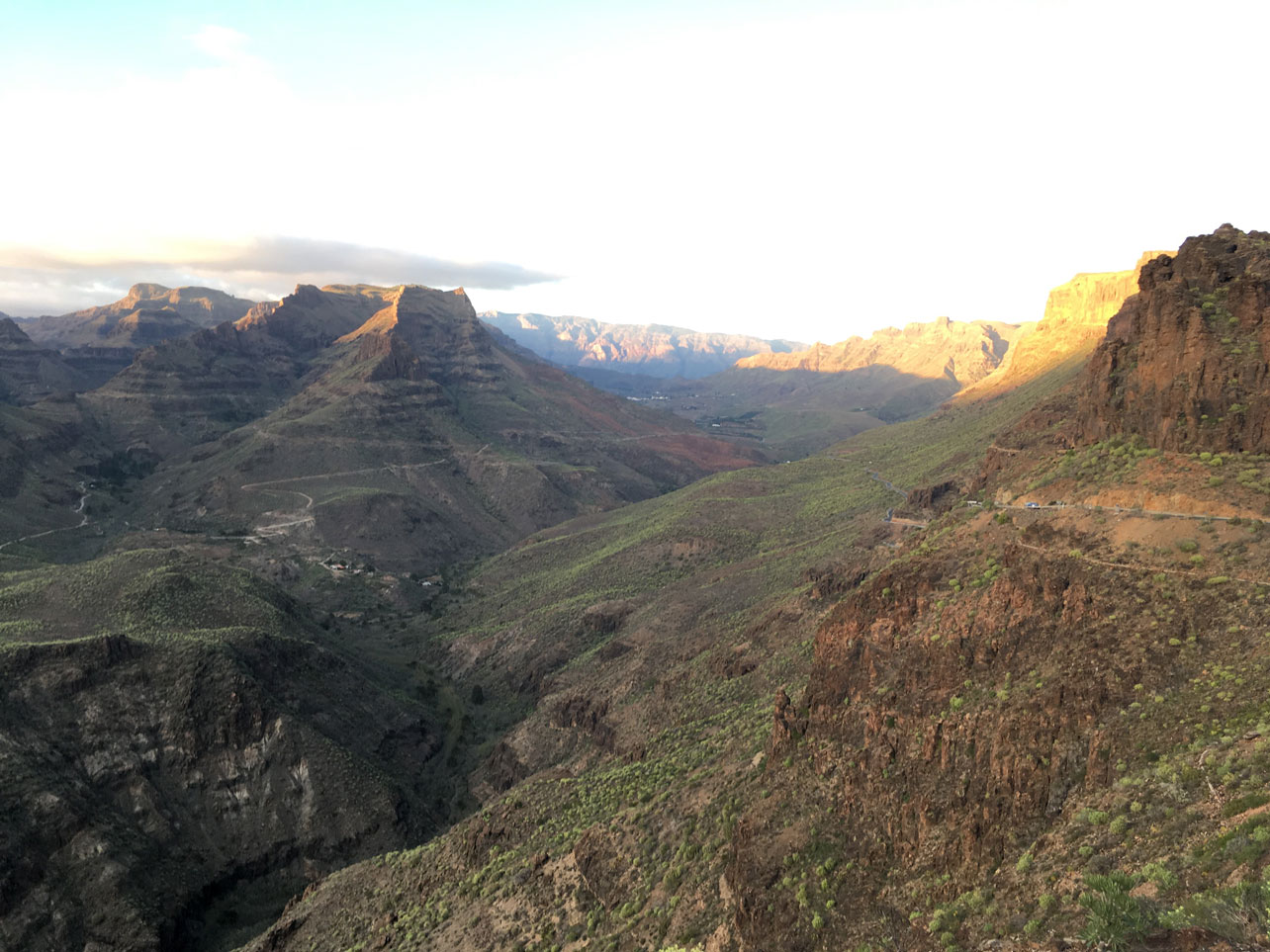 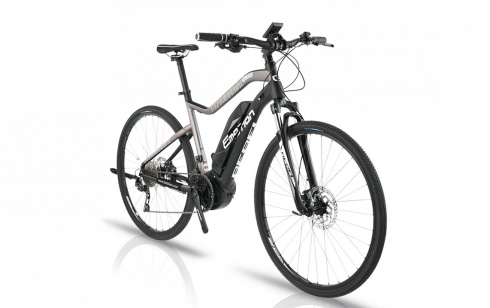 They weight 22kg. At the beginning we thought that this will be more of a downside which will not be outweighed by the assistance of the electrical motor. We were wrong.

How does the e-bike work

When the system is turned off (or the battery is dead) this e-bike it just an usual bike (only much heavier). When you turn it on, you have 5 modes of operation: 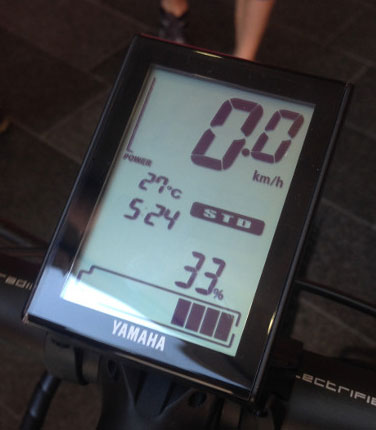 Basically the bike doesn’t pedal for you. It is just an assist. When you pedal - it assists you and makes pedaling much easier. And it helps only when there is tension (when you actually make an effort). If you’re going downhill, the assist in most cases will not do anything. On the top-left side of the LCD you can see a bar that shows how much power is used by the motor (and respectively how much it helps).

Higher the mode, more assist you get, and more battery gets used.

It seems that it doesn’t take into account what’s the gears’ speed - you could be on the lowest or the highest gears’ speed - and it will assist you depending on the mode you set and on how much force there is needed (based on feedback tension from pedals).

It is advertised that you can get up to 65 miles/105 km with assist mode. But I’d expect that to be on flat surface with most of the cycling done in ECO mode. Going uphill in ECO mode you can expect it to do no more than 50 km, if interchanging with standard more or high - you should expect less distance. A solution for that is having spare batteries or a charger.

We paid 25 euro per bike (rental for a day) + 5 euro fee for bringing the bike to a different shop and 3 euro for the helmet.

We were 3 people with not much training. Some of us cycle few times a week 10-20km, some do primarily other sports. But nothing crazy.

Two of us weighted 62-64kg, and one was 76kg. When you add bike’s weight you get 95kg and 108kg. The 12% difference doesn’t look much, but the heavier person’s bike was consuming the battery 20% faster. I’d say that was the combination of both of a higher mass and least training. 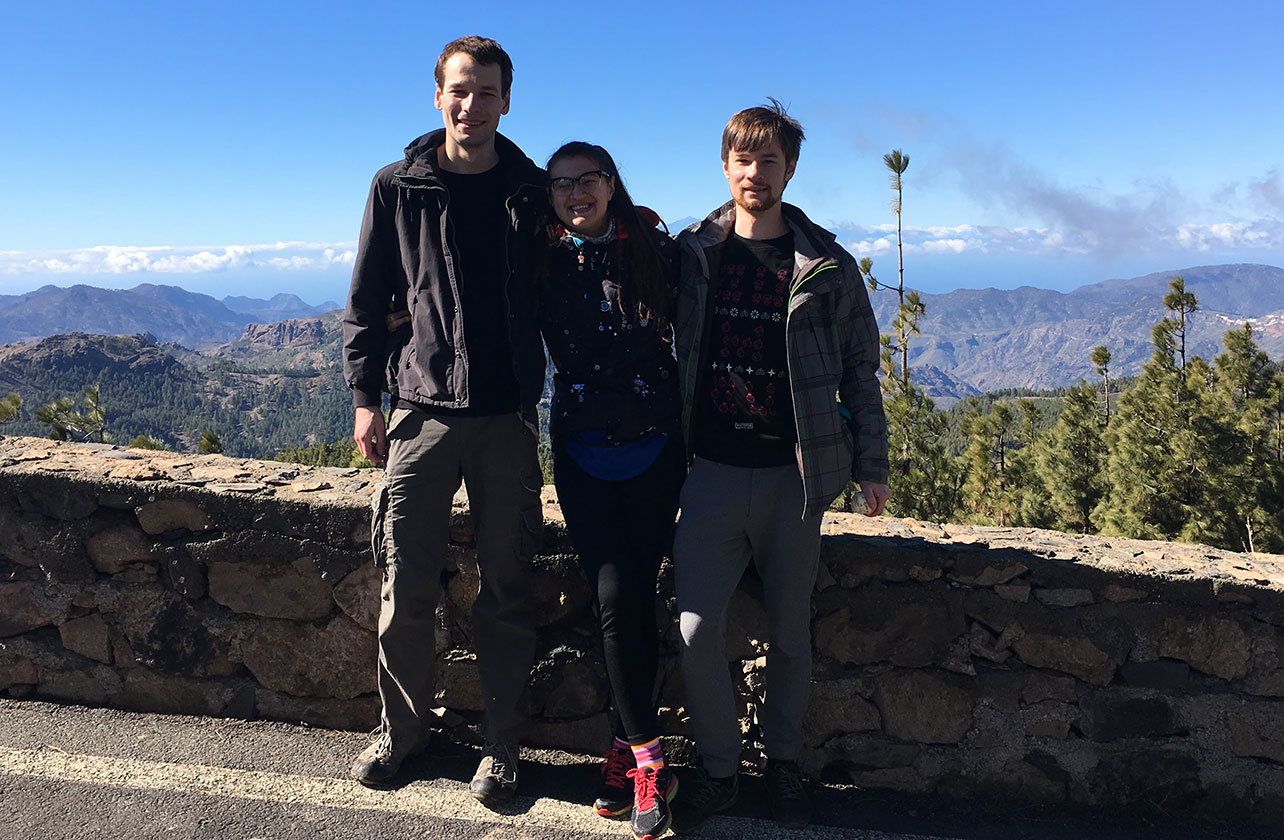 We started from Las Palmas de Gran Canaria, cycled uphill to the middle of the island, and then cycled mostly downhill to Maspalomas.

The whole route took us 10:30 hours, and followed this route:

Also in between cycling uphill we were doing breaks every 2-3 km. Sometimes to check the map. But most often to rest and enjoy the view (mostly to rest). Downhill we were making breaks after 5-10 km. 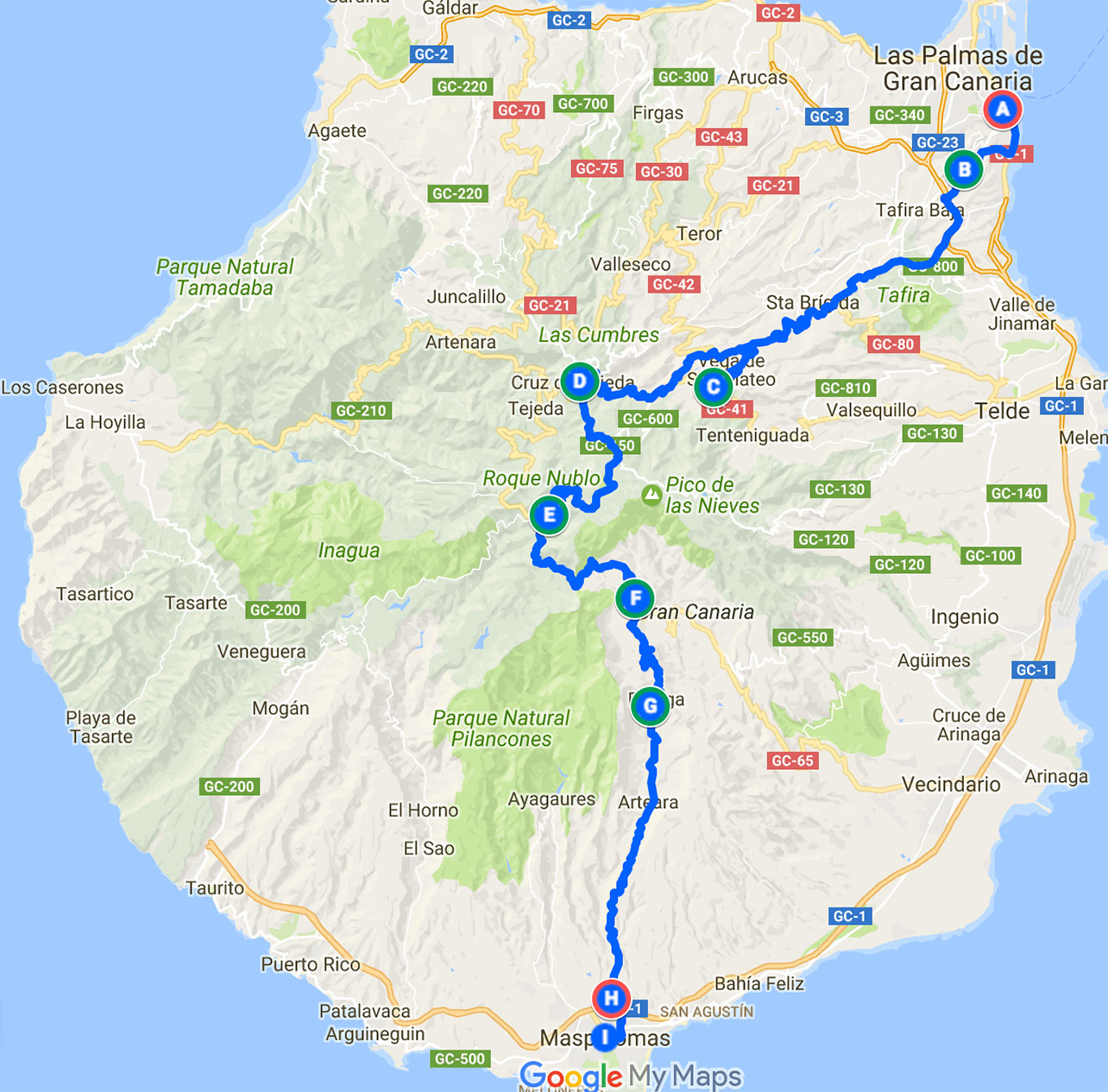 If you want to do the same route, take into account that you should get to Cruz de Tejeda with 40% battery. Otherwise you’ll get some pretty nasty hills right before San Bartolome ( that’s where I killed my last 20% of the battery).

If you have 2 batteries, then you should have at least one battery at 80% as otherwise it means that you’re burning your batteries too fast.

If you’re thinking on turning back, that’s the right time. Because after that point, you’ll go so much downhill that it will be really challenging to get back. 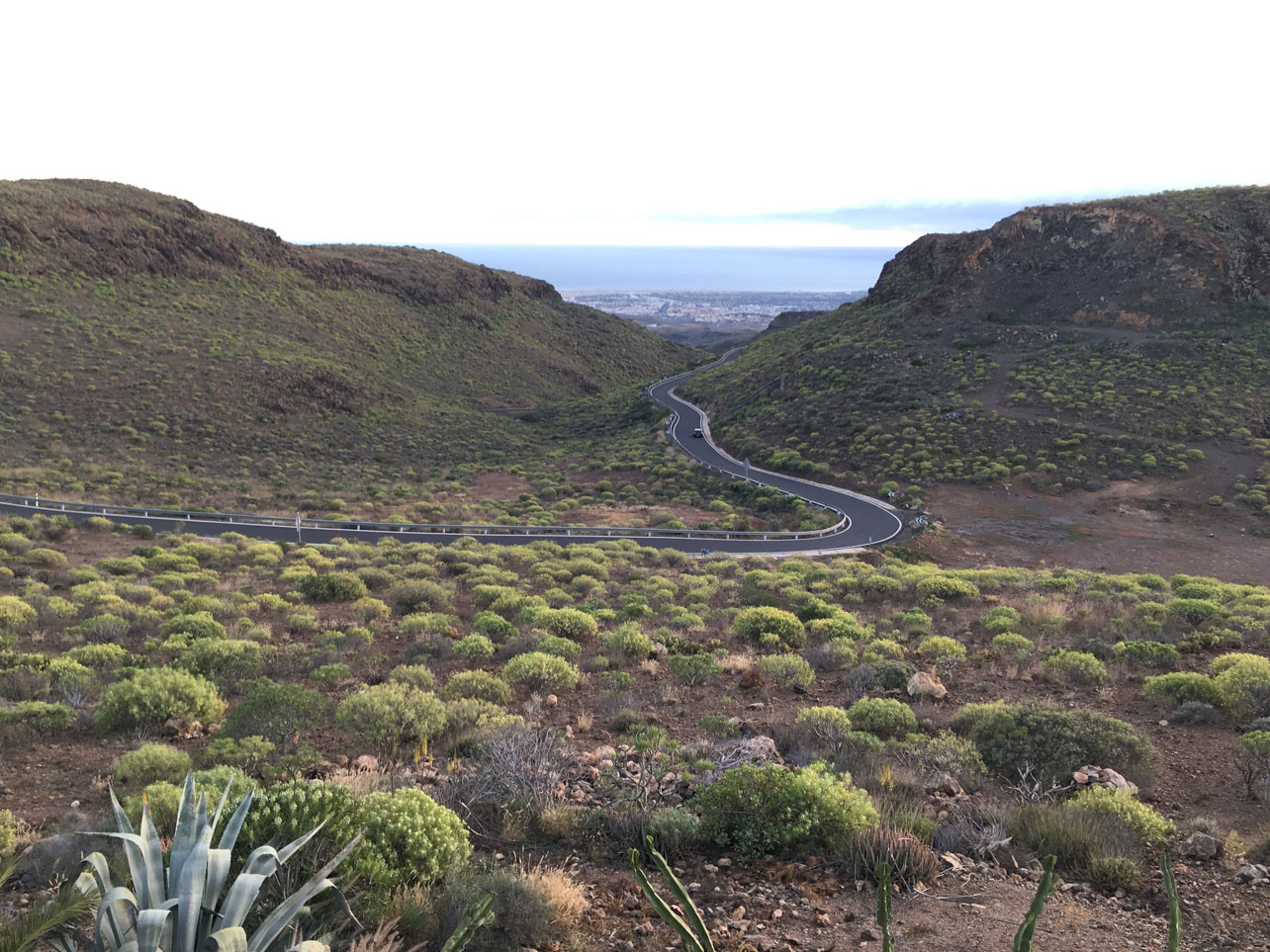 When you reach Ayacata, most of the road ahead will be downhill. But don’t get too excited yet. There will be 2 more hills: one is pretty easy, but the second one is really long and quite steep in one place. That’s where you’ll need your battery the most as you’ll most probably be exhausted.

Most of the roads go through villages, so you’ll have plenty of shops and places to eat. A bottle of 0.5L should be enough. Also you may grab few small snacks for emergency hunger.

You may expect to get a sunburn (especially if the day will be sunny). So try to cover your body and your face, or use a sun-cream. Also sun-glasses would be really helpful. 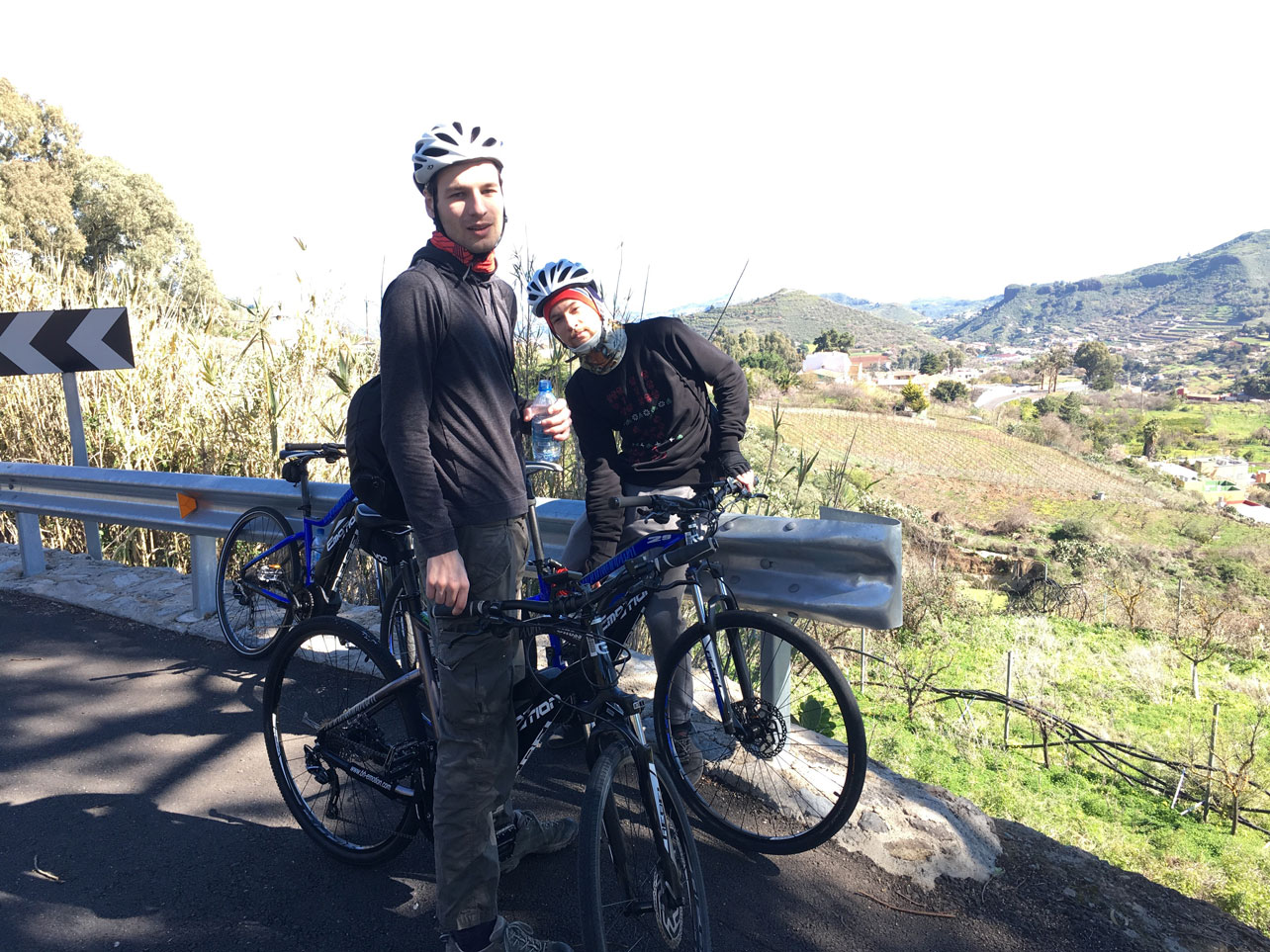 The cycling was pretty challenging and without e-bikes we’d never do that. But it was a fun and enjoyable experience. The most fun part was going downhill.

Because of the higher total mass, and quite a steep downhill, we were accelerating really fast. Few times we got to 60 km/h, and most of the downhill we’re cycling at 30-50 km/h, and that’s because of the breaking as most of the road is curvy (also there are speed limits and cars on the road).

I’d do it again, but with a spare battery (or 2) just to make going uphill a relaxed pleasure. This way I’ll stop more for the views, and less for resting.

p.s. Most of the pictures were taken by @anabalica. Thank you for that!